Argentina won the 2022 World Cup after a thrilling penalty shoot-out victory against France in an astonishing final.

Gonzalo Montiel’s spot-kick sealed a 4-2 win in the shoot-out for the South American side at Qatar’s 89,000-capacity Lusail Stadium on Sunday after the two teams were tied at 3-3 at the end of extra time.

The roller-coaster contest was one of the all-time great finals and cemented Argentina captain Lionel Messi’s already glittering legacy, with the 35-year-old guiding his side to their first World Cup win since 1986 – and third overall.

He scored two goals and then another in the shoot-out to cap a dominant showing at the tournament in Qatar, with Sunday’s showing marking a record-breaking 26th World Cup appearance – a tally that will not be added to after he announced prior to the final that this would be his last World Cup.

Following the match, however, Messi dismissed a possible retirement from the national team for now.

“I want to play a few more games as a world champion. I was lucky to clinch every title in my career, this was the only one missing,” he told reporters. “I want to take this one there [to Argentina] and enjoy it with everybody else.” 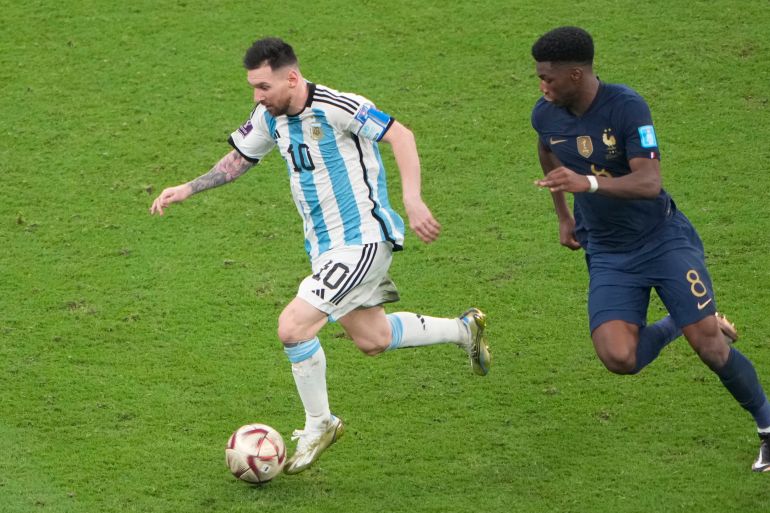 Messi had put Argentina 1-0 ahead in the 23rd minute from the penalty spot following a strong start from coach Lionel Scaloni’s charges in the initial exchanges.

Angel Di Maria, named in the starting lineup for the first time in the knockout phase, added a second in the 36th minute following a sweeping sequence of passes to cap a dominant first-half display against a lifeless showing from France.

France, who were looking to become the first country to retain the World Cup since Brazil managed the feat in 1962, continued to struggle in the second period.

The European giants took until the 68th minute to have their first attempt at goal but sprung into life with 10 minutes to go as Kylian Mbappe scored twice in the space of two minutes to put Argentina on the back foot and take the game into extra time.

The 23-year-old’s first strike came from the penalty spot, while his second was a stunning volley following a clever interchange with substitute Marcus Thuram.

Thuram was brought on along with Randal Kolo Muani just before halftime as coach Didier Deschamps took decisive action to try and change the momentum of the game.

Mbappe’s brilliance left Argentina hanging on as normal time drew to a close, but the match seesawed again when Messi tapped in his second goal in the 108th minute to restore Argentina’s lead.

Not to be outdone, there was still time for Mbappe to seal his hat-trick with a penalty with two minutes of extra time left and ensure the contest would be decided by a shoot-out.

Mbappe’s superlative efforts ensured he finished the tournament as its top scorer, with eight goals overall – pipping Messi, his teammate at French club side Paris Saint-Germain, by one.

He is only the second man to score a World Cup final hat-trick after Geoff Hurst did so for England in 1966.

The last South American champion was Brazil when Japan and South Korea hosted the tournament in 2002.

In Qatar, the country backed up its victory from last year’s Copa America, its first major trophy since 1993.

For France, the defeat marked the second time in the space of five World Cups that they have lost the final on penalties since they were beaten by Italy in 2006.